About Philip Sullivan and Ellen Connor

Philip J. Sullivan, son of Patrick Sullivan and Rose (last name most likely Corcoran) was born on January 6, 1840 in Dennbane, County Cavan. He was one of ten children. He and his wife Ellen Connor, daughter of James Connor (c1818-1897) and Anastasia Colfer (Colfour) (c1821-1884) was born 1843 in Taghmon, County Wexford, also had ten children. Philip immigrated c1856 and Ellen c1855, both with their parents and siblings. Philip and Ellen married in Chicago in 1865. They owned a grocery store on the southwest side of Chicago from 1871-c1900s. By 1910, they were living at 833 Madison in Evanston, Illinois, where they spent the rest of their lives. They had ten children: Mary, Anastasia (Ann), James (Jay), Infant, Frances (Frank), Peter, Alexander (See also Sullivan/Madigan Genealogy), Michael, Charles, and Philip. Philip Sr. died of a cerebral hemorrhage on May 26, 1915 and Ellen died of a stroke on December 3, 1919.

TO ENLARGE AN IMAGE, DOUBLE CLICK ON IT AND IT WILL OPEN LARGER IN A SEPARATE WINDOW.
YOU MAY NEED TO CLICK ON IT AGAIN TO FULLY INCREASE ITS SIZE.

Philip Sullivan has been recognized as a Cook County Pioneer by the Chicago Genealogical Society. In October, I submitted documents which prove Philip was in Chicago prior to the Great Chicago Fire of 1871 and further that he is my direct ancestor. The following document was issued in testimony of his Pioneer Ancestry. 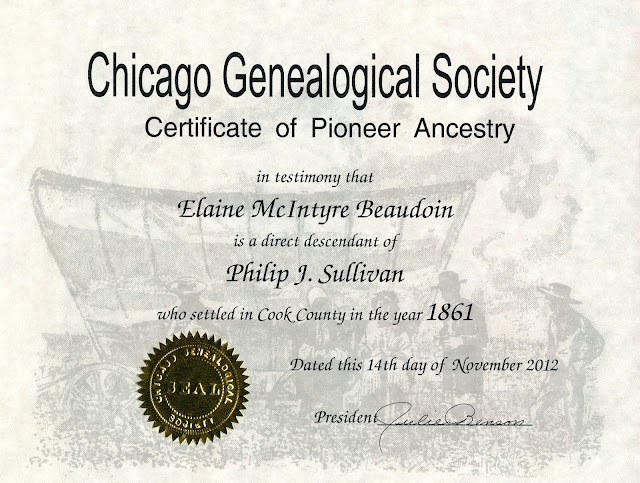 Also with the submission was the photograph which appears at the head of this Blog showing the Sullivan Family c1908/09 and the following writeup on Philip.


Philip J. Sullivan c1840 - 1915
By Elaine McIntyre Beaudoin, great granddaughter
October 29, 2012
Born in 1840 on the eve of the Great Irish Famine,[1],[2] Philip Sullivan, eighth of ten known children, most likely saw inconceivable sorrow, starvation and death during his early years in Ireland's small agricultural townland of Dennbawn.[3]  Located in the interior of the island, County Cavan, and in particular the civil parish of Denn where Dennbawn is located, had good arable and pasture land in the late 1830s.[4]  However, as the Famine took hold, the ability to feed a family of 12 on a farm of only 14 acres must have been very difficult.[5]  This Irish devastation forced many to immigrate including Philip and several of his brothers and sisters.

Philip's migration was preceded by at least five older siblings, two of whom arrive in America as early as 1850.[6]  His parents, Patrick and Rose (Corcoran) Soraghan remained in Dennbawn, spending the remainder of their lives on the family farm eventually turning it over to their youngest son, Matthew Soraghan.[7],[8]

Although no passenger list has been located for Philip, he is known to be in Chicago in 1861 and on some records it states he was in the US as early as 1856.[9],[10]  During his early years in Chicago, Philip lived with his brother Michael, who owned a grocery store just north of Chicago Avenue and two blocks east of the Chicago River.[11]  During these first years in the City, Philip earned his living as a cooper, making and repairing barrels.[12] Prior to marriage, his living arrangements were rather itinerant, wandering back and forth between the homes of his brother Michael and his brother Andrew.[13]  The regular move was probably not that difficult as the two brothers lived less than 2 short blocks from each other.[14]

Like his brother Michael, Philip went into the grocery business, opening a store at his residence on Sholto in 1871.[24] In Chicago, just before the Great Fire there were nearly 800 retail grocers,[25] almost all of which were family owned businesses. Although he lived within a few blocks of the O'Leary family of "cow" fame, his home and grocery store were spared destruction in the Great Fire unlike his brother Michael's grocery store which was destroyed.[26] The Sullivan's "store was very popular in the neighborhood owing to the kindness and charity of the family."[27]  The neighborhood which Philip and his family lived in during the 1870s was mostly Irish and his grocery store was very likely a shop that served his fellow countrymen.[28]  Life as a grocer in all probability provided the Sullivans with a regular income, at least enough to feed and clothe his large family, and definitely a much better life than he could have ever imagined in Ireland at that time.  He remained a grocer in the same location until the early part of the 20th century.[29]

At the time Philip moved into his home on Sholto their church, Holy Family, was quite new.  This Victorian Gothic edifice on Roosevelt Road, founded by the Jesuits in 1857, served mostly Irish immigrants and probably made for a good social experience for him and his family.[30]  Philip and Ellen were active in their church baptizing all of the Sullivan children there.[31] Five of their sons were at one time serving as Acolytes, with one of them eventually becoming a Jesuit priest.[32] The Sullivans even rented a pew in Holy Family Church for their family paying $10 per year.[33]

By 1893, Philip's sights were looking north toward Evanston, the hometown of his wife, Ellen.   In all probability Philip used the money he had earned from his grocery business, to invest in the construction of a Victorian "double house" which included two side-by-side apartments of 6 rooms each located at 833-835 Madison, Evanston.[34]  Philip's brother-in-law, John Connor, was in the construction business and had already built several homes in Evanston.[35]  His firm, Connor and McCann, took on the construction of the Madison Street home.[36]  The home was built with asphalt composition siding, an asphalt shingle roof and gas lighting at a cost of $4,500.[37]  Although the home was completed in 1894, Philip rented it out to several professional families for nearly 15 years before he closed his grocery store and moved to Evanston about 1909.[38],[39]

For the next six years, until his death in 1915, it is likely he and his wife enjoyed living on the quite residential street in this suburb of Chicago.  Philip died on May 25, 1915 in his home and was waked there as was the custom of the time.[40]  A high Mass was said for him at St. Mary's Church in Evanston and he was buried, with other family members including his brothers Andrew and Michael, in Evanston's Calvary Cemetery.[41]

I have been informed the historical biography and the photo will appear in a future issue of the Chicago Genealogical Society Quarterly.
Posted by Elaine McIntyre Beaudoin at 9:45 PM 1 comment:

At long last, thanks to Lori Reiss (wife of great, great grandson of James Connor and Anastasia Colfer) sharing the Connor Family Bible with me, the marriage record of Philip Sullivan and Ellen Connor has been located.

The Bible provided the location of their marriage, Old St. John Church, Chicago, Illinois.  Although the Bible page states the marriage occurred on November 5, 1865 (the year cannot be read on the Bible page as it was written into the decorative edging) the entry has been located in Old St. John's Marriage Register and the date given is November 2, 1865.

Note the Connor name is spelled Conners.  Bridget is believed to be Ellen's sister.  The name Ledy (or Leddy) appears associated with the Sullivans in other documents.
Posted by Elaine McIntyre Beaudoin at 9:04 PM No comments:

The Evanston Historical Society had realtor listings including one for 833-835 Madison Street, Evanston.  The two cards seem to reflect the double house being put on the market, then taken off and relisted, or at least the then owners hiring a new realtor.

In 1973 there was a note that the building was: lawful non-forming, no elimination date.  It must have had some grandfather clause due to the age, which at this time would be close to 80 years old.

By the mid-1970s, the double house was heated with oil and was constructed of composition siding with an asphalt shingle roof.  The corner lot was quite large, 50.6 feet by 130 feet.  This is the photo of the property that accompanied the realty description:


Posted by Elaine McIntyre Beaudoin at 7:54 PM No comments:

Philip Sullivan had 833-835 Madison, Evanston, built in 1893.  In 1894, a W. A. Linn and his wife, Zella M., became the first tenants at the 833 address.  He was the chief clerk with the Chicago, Milwaukee and St. Paul Railroad which was located in the Old Colony Building in Chicago.

After six years, a Mr. Dwight L. McNair and wife Lulu, along with their probable daughter Miss Nellie P. McNair, were the next tenants.  He was a proofreader with Hollister Brothers in Chicago and the daughter was a stenographer.

In 1909, Philip and his wife Ellen moved into their home in Evanston which was now 15 years old.  By now, Philip was about 69 and probably had sold or closed his grocery store in Chicago on Sholto street.  Living with their parents were two sons, Peter I. who was a clerk for Durand and Kasper in Chicago and Phillip M. who was working as a substitute clerk for the United States Post Office at Church and Sherman.


The original tenants at the 835 Madison entrance were a W. E. and Eliza B. Hess.  By 1900, Herbert, a cashier at the Chicago Journal and his wife Elvira Withington were occupying the home.

The year Philip Sullivan and his family moved into 833, his next door neighbors were Samuel, an auditor for the Chicago and Northwestern Railroad, his wife Jennie and their daughter Mabel.  This family remained the Sullivan neighbors throughout the Sullivan's time in the "double house".

Posted by Elaine McIntyre Beaudoin at 7:54 PM No comments:

Is This Blog Still Active?

As new information is located and lends itself to posting on the blog, it will be shared here. So, even though there may not be recent posts, the blog is still active. If you have a question, email me at elaine.beaudoin@gmail.com

Elaine McIntyre Beaudoin
Elaine has been working on her family history for more than 25 years and is particularly interested in Irish and Chicago genealogy. She is retired from DePaul University and holds a master's degree in Library Science and an MBA. Elaine became interested in using blogs as a way to communicate with her family, grammar school friends and university colleagues in 2010, establishing, over time, 15 different blogs. She has served as the Road Trip Chair and Archivist for the Computer Assisted Genealogy Group - Northern Illinois (CAGGNI) and is the immediate past Chair of the DePaul Emeritus Society. Elaine is a member of the National Genealogical Society (NGS), New England Historic Genealogical Society (NEHGS), Chicago Genealogy Society (CGS), Computer-Assisted Genealogy Group - Northern Illinois (CAGGNI), and the Irish Genealogical Society International (IGSH).