About Philip Sullivan and Ellen Connor

Philip J. Sullivan, son of Patrick Sullivan and Rose (last name most likely Corcoran) was born on January 6, 1840 in Dennbane, County Cavan. He was one of ten children. He and his wife Ellen Connor, daughter of James Connor (c1818-1897) and Anastasia Colfer (Colfour) (c1821-1884) was born 1843 in Taghmon, County Wexford, also had ten children. Philip immigrated c1856 and Ellen c1855, both with their parents and siblings. Philip and Ellen married in Chicago in 1865. They owned a grocery store on the southwest side of Chicago from 1871-c1900s. By 1910, they were living at 833 Madison in Evanston, Illinois, where they spent the rest of their lives. They had ten children: Mary, Anastasia (Ann), James (Jay), Infant, Frances (Frank), Peter, Alexander (See also Sullivan/Madigan Genealogy), Michael, Charles, and Philip. Philip Sr. died of a cerebral hemorrhage on May 26, 1915 and Ellen died of a stroke on December 3, 1919.

TO ENLARGE AN IMAGE, DOUBLE CLICK ON IT AND IT WILL OPEN LARGER IN A SEPARATE WINDOW.
YOU MAY NEED TO CLICK ON IT AGAIN TO FULLY INCREASE ITS SIZE.

The Evanston Historical Society had realtor listings including one for 833-835 Madison Street, Evanston.  The two cards seem to reflect the double house being put on the market, then taken off and relisted, or at least the then owners hiring a new realtor.

In 1973 there was a note that the building was: lawful non-forming, no elimination date.  It must have had some grandfather clause due to the age, which at this time would be close to 80 years old.

By the mid-1970s, the double house was heated with oil and was constructed of composition siding with an asphalt shingle roof.  The corner lot was quite large, 50.6 feet by 130 feet.  This is the photo of the property that accompanied the realty description:


Posted by Elaine McIntyre Beaudoin at 7:54 PM No comments:

Philip Sullivan had 833-835 Madison, Evanston, built in 1893.  In 1894, a W. A. Linn and his wife, Zella M., became the first tenants at the 833 address.  He was the chief clerk with the Chicago, Milwaukee and St. Paul Railroad which was located in the Old Colony Building in Chicago.

After six years, a Mr. Dwight L. McNair and wife Lulu, along with their probable daughter Miss Nellie P. McNair, were the next tenants.  He was a proofreader with Hollister Brothers in Chicago and the daughter was a stenographer.

In 1909, Philip and his wife Ellen moved into their home in Evanston which was now 15 years old.  By now, Philip was about 69 and probably had sold or closed his grocery store in Chicago on Sholto street.  Living with their parents were two sons, Peter I. who was a clerk for Durand and Kasper in Chicago and Phillip M. who was working as a substitute clerk for the United States Post Office at Church and Sherman.


The original tenants at the 835 Madison entrance were a W. E. and Eliza B. Hess.  By 1900, Herbert, a cashier at the Chicago Journal and his wife Elvira Withington were occupying the home.

The year Philip Sullivan and his family moved into 833, his next door neighbors were Samuel, an auditor for the Chicago and Northwestern Railroad, his wife Jennie and their daughter Mabel.  This family remained the Sullivan neighbors throughout the Sullivan's time in the "double house".

Posted by Elaine McIntyre Beaudoin at 7:54 PM No comments:

Philip Sullivan applied for a building permit for the property at 833-835 Madison, Evanston, Illinois on February 23, 1893.  In reality, the builder, Connor and McCann, probably was the actual applicant.  The Connor of the firm of "Connor and McCann" was John Connor, Philip's brother-in-law and brother of Ellen.

The home anticipated to be built would be made up of 18,000 bricks, 11 cubic feet of concrete and 700 sq. yards of plastering at a cost of $4,500.  It would have 12 rooms, 2 bathrooms, heated by a furnace (most likely coal) and lighted by gas light.  The structure would be built so that two families could occupy side-by-side units.  What today we might call a townhouse, i.e., having a common wall. A building arrangement that is quite common, even today, in Evanston.  The architect, S. A. Jennings, designed many buildings in Evanston, especially homes of this nature, during this time period.

Although the plans were approved February 27, 1893 with the water and sewer permits provided on March 1, 1893, the application wasn't completed until September 14, 1993.

In 1893, Philip Sullivan and family were still living at 90 Sholto, Chicago, where Philip ran a grocery store.  So, it appears he was planning for his future as he didn't move to Evanston until 1909. 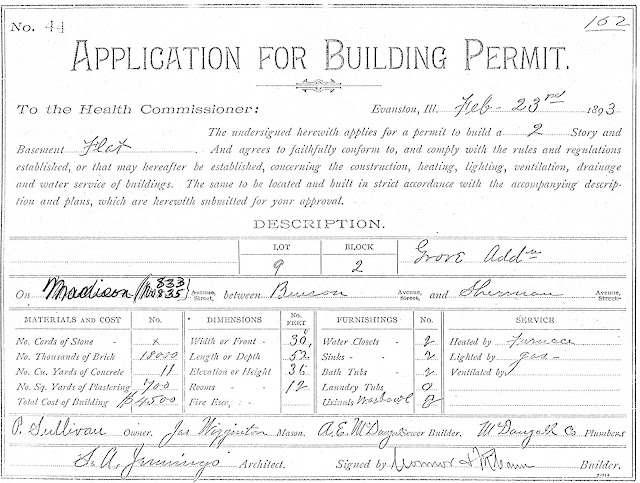 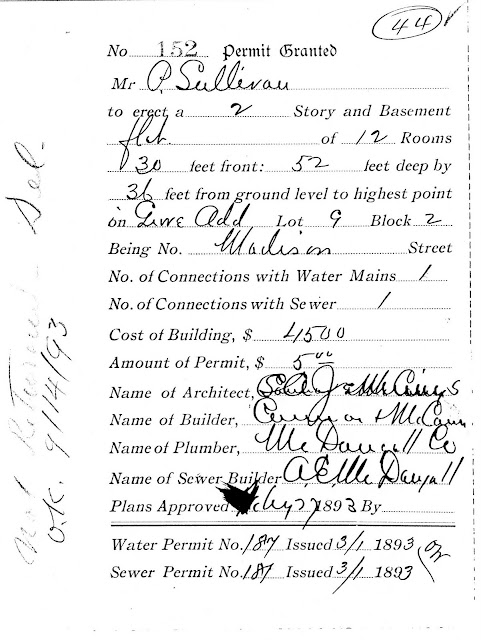 Click here for more information on the builders, Connor and McCann
Posted by Elaine McIntyre Beaudoin at 7:53 PM No comments:

"During the ten years from 1880 to 1890, the firm of Edbrooke and Burnham put up quite a number of houses in Evanston. It was the period of the "Queen Anne" in architecture. Probably the residence of Dr. Al. C. Bragdon, 1709 Chicago Avenue, is as typical of this period as any other.

"Now began building on a large scale by many architects of all degrees of ability. About the time that Architect Lyons sought other fields for his genius, Mr. S. A. Jennings began the practice of architecture here on a small scale, but Evanston was growing fast and, through the force of circumstances, he became the busy architect from 1885 to 1895. During that time he designed several hundred buildings for all purposes and of all sizes and varying cost, but all in one style. A critic who has seen two or three of his houses can recognize his hand in all the others, and there is hardly a block in the entire city where he has not left his mark. There is no doubt he designed more Evanston buildings than any other one man before or since. The substantial homes of J. W. Low, 1560 Oak Avenue, and Timothy Dwight, 730 Hinman Avenue, are typical "Jennings" houses. Perhaps the most expensive of his houses was the W. H. Jones house, 1232 Ridge avenue, now owned by W. H. Redington."[1]

"By the late 1880's, the congregation of St. Mary's had outgrown its twenty-year-old frame church. In 1890, it was evident that a larger church edifice was needed and it was then decided to build our present stone church. In the following year, 1891, the old frame building was moved to the rear of the lot, turned around, veneered with brick, and remodeled into a school. The cornerstone of the new church was laid on May 3, 1891. The church opened for worship and was dedicated in May 15, 1892 by Archbishop Feehan. It was built by Michael Foley, one of the parishioners of St. Mary's. It is constructed from Ashlar limestone and the two 100-foot-tall spires of the church were copied from St. Patrick's Church in Philadelphia. The architect was Stephen A. Jennings, who had designed many picturesque homes in Evanston."[2]

Is This Blog Still Active?

As new information is located and lends itself to posting on the blog, it will be shared here. So, even though there may not be recent posts, the blog is still active. If you have a question, email me at elaine.beaudoin@gmail.com

Elaine McIntyre Beaudoin
Elaine has been working on her family history for more than 25 years and is particularly interested in Irish and Chicago genealogy. She is retired from DePaul University and holds a master's degree in Library Science and an MBA. Elaine became interested in using blogs as a way to communicate with her family, grammar school friends and university colleagues in 2010, establishing, over time, 15 different blogs. She has served as the Road Trip Chair and Archivist for the Computer Assisted Genealogy Group - Northern Illinois (CAGGNI) and is the immediate past Chair of the DePaul Emeritus Society. Elaine is a member of the National Genealogical Society (NGS), New England Historic Genealogical Society (NEHGS), Chicago Genealogy Society (CGS), Computer-Assisted Genealogy Group - Northern Illinois (CAGGNI), and the Irish Genealogical Society International (IGSH).